Gwen Stefani , for being relentlessly herself.

And   Louise Brooks for the same reason 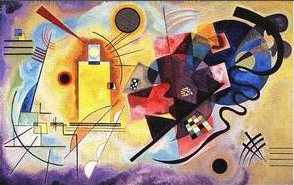 Kandinsky, who tried to paint thought itself.  He was  inspired by clairvoyantly seen images in   Leadbeater & Besant's book called thought-forms, published in 1901

( this list is not in any specific order )  Who showed us all we are and can be...

...but what would  Brian Boitano do?

nah....just kidding.
No disrespect meant to the Lord of the Rinks. He landed his first triple jump at age 11.

My real skater's inspiration was Kristi Yamaguchi  especially in the 1992 Olympics.  I truly  admire the ice princess's gracefulness. I was usually cast as "the pharaoh's hunting hawk" in ice shows or something similar.

I can't leave out Dieter (DEE-tah) from Sprockets, who characterizes the avant-garde Berlin -Bohemian lifestyle for us all. Touch him. Love him.

D: Welcome to Sprockets. I am your host, Dieter.  It has been a very busy week here in Berlin. Jourgen von Keitel's exhibit "Scabs On Canvas" opened at the Schussel Calle, the Gertrude Bromf troupe previewed their performance in wax at the Theater of Unhappiness, and the Berlin wall was dismantled. For the masses the wall's collapse represents freedom and opportunity. But for me, it is a chance to meet the most brilliant countercultural filmmaker in the East, Gregor Voss. Seen here on East German television last year, Voss, the suppressed visionary whose films include "The Dead Coat", "Irritant Number 4", and "Here Child, Finish Your Nothing", he entered the West three days ago, and has agreed to appear on Sprockets and speak with me, his greatest fan. Please welcome Gregor Voss. Welcome to Sprockets, Gregor Voss.

D: Gregor Voss, your presence intimidates me to the point of humiliation. Would you care to strike me? 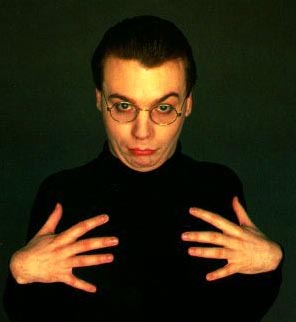 he's as happy as a little girl

Nostradamus, a man very much ahead of his time.