Egyptian Temple Ritual
During the time of Amenhotep III , approximately 3300 years ago

look upon my offering 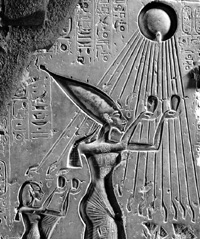 and this perfume"lit. perfume this

accept these her offerings brought: lit Salute these her baskets of tribute made to bring. 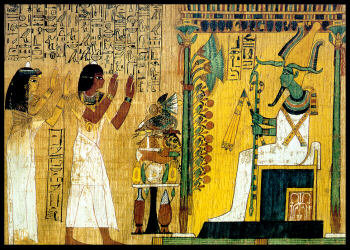 A temple maiden would be a cup-bearer, tend to the lamps and arrange the vestments. She would also take part in the services and ceremonies.  Here is an actual account, taken verbatim from a woman regressed to a lifetime in Egypt 3300 years ago:

"I am holding in each hand a sort of lamp with a pedestal about a yard long. It is of wide, saucer-shape, with a white flame coming out at the top. They are intended to fit into sockets with a metal ring, one on either side of a curtain which conceals a central doorway at the end of a large hall. It is the entrance to a hidden sanctuary, with rounded steps leading up to the centre. The lights were intended to keep away evil spirits, and the incense to keep pure the sanctuary itself. 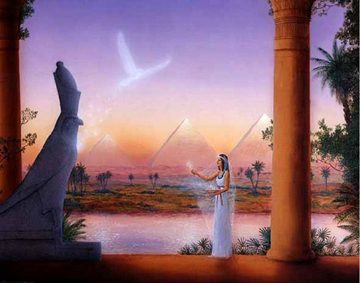 Within there is an altar, in the centre of which burns an everlasting blue flame, very small, but it seems to come out of the stone. It never goes out, and yet it is never tended. I wonder not if it was some kind of mineral light, for it was a pale, greeny-blue, cold flame which id not flicker; no bigger than the light of a candle, and it seemed to come up out of a tiny aperture in the stone. There was some significance between this flame and the decision of the god to whom requests were made. When the god refused the request, or was silent, the flame gave no white light, But when the request was granted the flame showed it accordingly. "

The festival of Amoon-Ra- "the most important festival of the year...for he was the most powerful of the Gods;  the most feared, and yet one from whom the greatest blessing was sought and hoped for.

The great Farong (house of life = Pharoh) is in this procession. I can see bulls with long, smooth horns, garlanded with flowers. I was a cup bearer in this service."