The Hathors' contribution to Egypt was within that early formative period of the Hathor goddess cult. We call it a cult, but it was a major religious stream at the time. What they were working with was the balancing of the masculine and feminine principles, but the inner teaching of what they were about was the archetype of the sun and the moon, the sun being the masculine principle and the moon being the feminine principle.Silver and Gold. When those two are brought into balance within our own bodies, we are balancing the electric (male) principle and the magnetic (female) principle. So you have a balancing of electromagnetics. It has nothing to do with sexuality; it has to do with subtle energies within the nervous system. 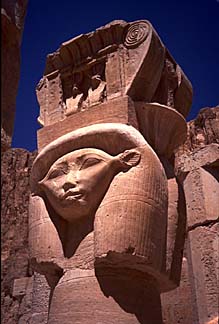 In the Hathor temples, the priestesses went into a trance state and communicated through dreamtime with the goddess Hathor, which in our psychological language, we would call a feminine archetype. Being in communication with that archetype would put them into communication with the Hathors. The Hathors could then instruct and teach the priestesses. There were mystery schools where initiates, if accepted, could study these techniques and work towards their own mastery.

The entities of the Hathor race were those who, as did those of Ra, make contact with various cultures of this planet’s history, most notably those of the Egyptian culture, and this contact was not just one period or point in your past but has been that of a continual nature. Some aspects of this contact became more noteworthy or widespread than others. These entities were most helpful in planting the seeds of the concept of unity and infinity within the Egyptian culture which allowed those of this culture to be readied for consideration of the Law of One. Thus the entities of the Hathor race worked in conjunction with those of Ra in order to allow an expansion of the concepts in the philosophical or spiritual realms of the Egyptian culture so that there was seen to be not just many gods or powerful forces at work in the universe about these entities but that there was truly one Creator from which all else sprang. This was a revolutionary concept, shall we say, for those of the Egyptian culture. Is there a further query, my brother? - Channeled from RA

Their truths are available now. Read THE HATHOR Material, channeled by Tom Kenyon. For a quick example of their messages:

Message for the Life Sustainers

A Message from the Hathors through Tom Kenyon
June 21, 2004