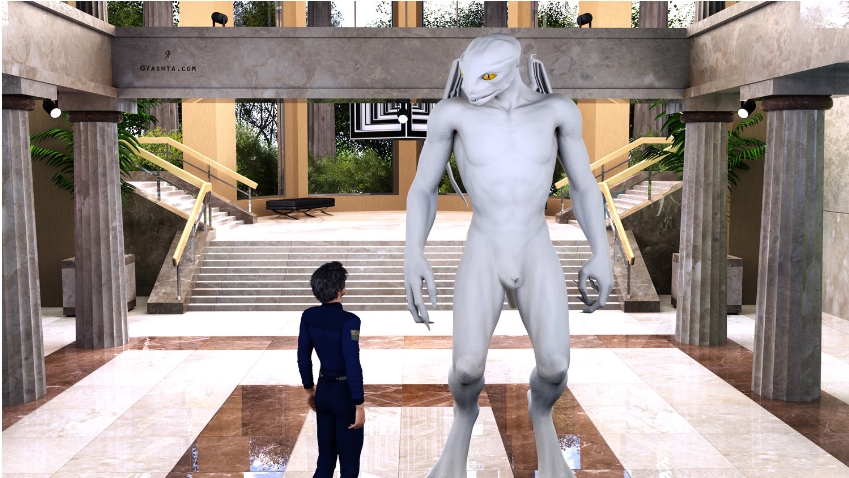 It is critical for you to understand that dark, abusive extraterrestrials do exist, beings with advanced technology who are interested in controlling human society and dabble in in multi-species genetic manipulation. These beings are well known in UFO circles and in the new age community; they are referred to as reptilians, men in black, and so on. Through various kinds of extraterrestrial visitors are known to some humans we will refer to all negative-minded extraterrestrials as Reptilians or Grays. (Dark Lords can be in human as well as extraterrestrial forms.)

Reptilians are beings originating from several star systems such as Draco, Orion and Zeta Reticulum. They have deliberately separated themselves from the greater galactic community and the restrictions of Universal Law so they many be free to practice their diabolical ways upon sleeping humans. Reptilians are fascinated with the games humans play, for they too, find pleasure in indulging themselves with fear's intrusive ways.

A close encounter with a Reptilians certainly provokes terror, yet a confrontation with these godless entities is sure to widen one's viewpoint as to the nature of reality.
Albeit having a rude awakening, a Reptilian's victim is apt to be jolted into turning tail and running home to God.

The lower vibrational dominions, which include the third-dimensional and lower fourth-dimensional astral plane octaves, are replete with negative beings enraptured with Dark Lords. Extraterrestrials who abduct humans are among Dark Lords and their followers. It will help you understand the abducting aliens' point of view by considering the following: Most humans believe animals should be used as food fodder, as zoo captives, and as subjects for biological and genetic experiments, habitat relocation and demolitions, and scientific investigation such as drug therapy and surgical technique exploration. Most humans look upon animals as having little import other than to serve the will of their human masters. Well, abducting extraterrestrials view humans in much the same way. To them you are a lesser species; in fact, they hold you lower than animals because of your compulsion to soil and destroy the environment of your home planet. No other animal degrades its living quarters in such a fashion.

Conversely, beings of light view all life forms as sacred, as essences of Divine Principle in manifestation. Vibratory placement does not mean one is better of lesser than another. A child attending kindergarten is not looked upon as being of less worth than a college graduate, only at a different stage in formation and development. The things you teach your beautiful children - knowledge of things, places, events, people, and language- are wasted if the foundation of these children and the subjects you teach are not rooted in the Law of Cosmic Intelligence.

To Ensure your safety, it behooves you to maintain clearly delineated boundaries around your energy (auric) field. Do not fool yourself into believing that all extraterrestrials are dedicated to serving Omnipotent Light. Not all extraterrestrial energies visiting Earth are interested in spiritual evolution. The motives of some are self-serving and their methods are harshly destructive.

Universal Imperative Law operates on a freewill frequency. As such, the philosophy of light-serving extraterrestrials is structured upon the precepts of self-responsibility, as the Law of Free Endeavor clearly implies. In compliance with this law, the Oneness that makes up the star councils maintains a firm policy of noninterference in the affairs of negative-serving entities. Nevertheless, when extremely destructive elements critical to Earth's overall stability develop, we do step in and make a few energy adjustments here and there. Situations warranting our interference include imminent danger to the planetary body as a whole, launching of full-scale nuclear war, and an attempt by Dark Lords to take complete control of human society.

Dark Lords are both clever and controlling. In these closing years of human history, as humans understand it, Dark Lords are primarily occupied in tracking swings in human energy patterns. Earth is tenuously held as she slides inevitably to heightened critical mass and the trans-dimensional energy window that awaits her.

Information on alien abductions is rampant in modern times, for humans delight in frightening themselves more than they delight in uplifting themselves. This extremely unfortunate circumstances doubles star council efforts to incorporate intense refined light in this place of shifting darkness.

Are abducting aliens wrestling away your innocence? Innocence to and from what? No unsavory being can disconnect your Soul's innocent conduits to Divine Truth. If you view these unhealthy entities with compassionate understanding, you will know that like many humans, they, too, are about to miss an opportunity to upgrade their Soul's resonate status when Earth bursts higher upon the galactic planes. Extraterrestrials who represent the forces of darkness are very much like cold-hearted humans who struggle in vain to regain the loss of their love's once innocent blush.

- Excerpt from Eagles of the New Dawn, by the Arcturians- Channeled by Patricia Pereira, and all 4 volumes highly recommended.

ET Moon Base - you've got to be kidding me